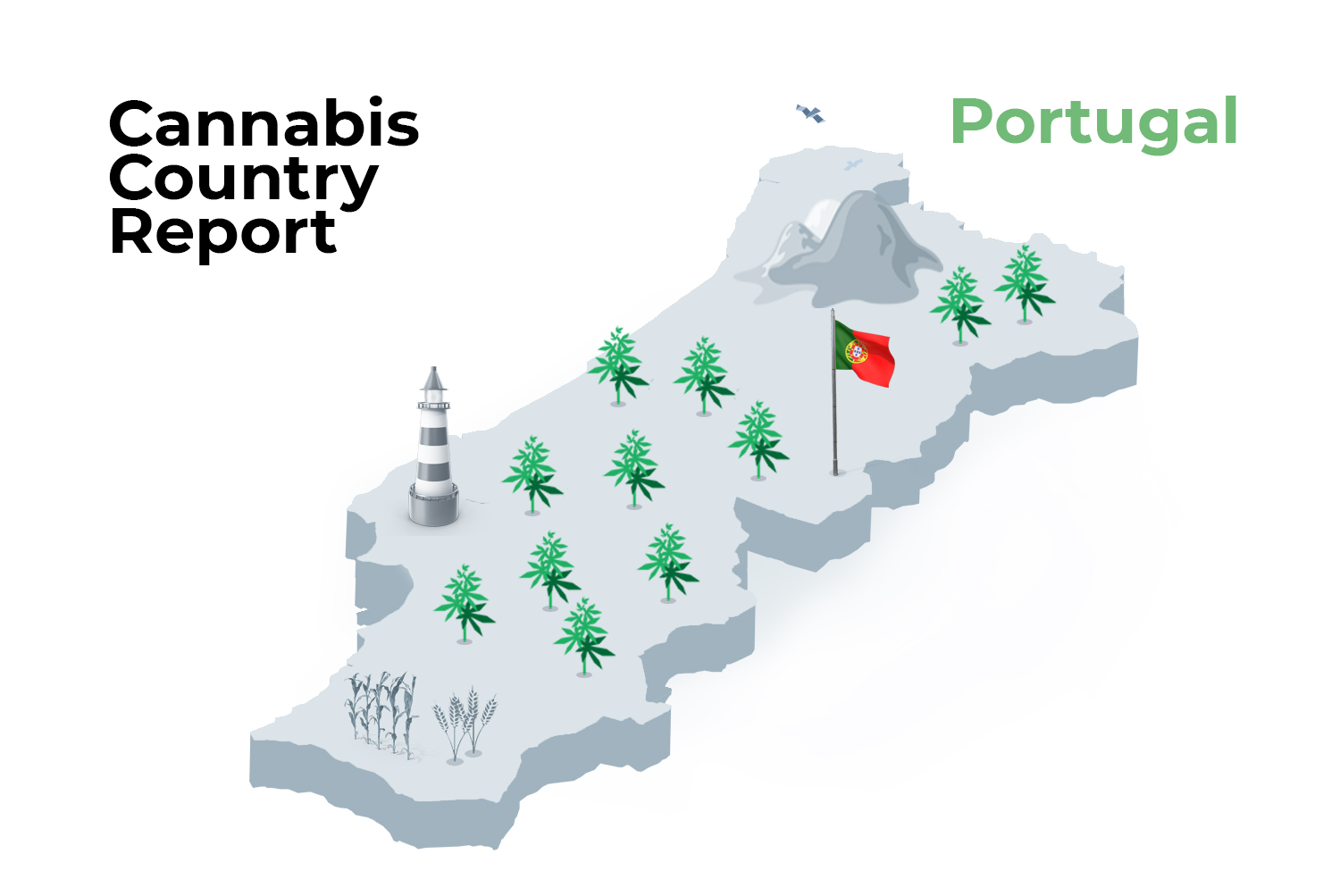 Portugal has a great climate and location for cannabis grow and export. Outdoor cannabis grows well in Portugal and can be produced at a lower cost than other European countries

It’s decriminalised but must be prescribed by a doctor.

Portugal’s current cannabis laws are regarded as among the most progressive in the world. In 2001, the government decriminalised personal cannabis use, focusing on treatment rather than punishment. As such, overall numbers of drug users in the country have gone down. However, it wasn’t until 2018 that medicinal cannabis was legalised.

CBD is legal for medicinal purposes. Industrial hemp production is legal in Portugal. To grow hemp companies must apply for a permit from Portugal’s Ministry of Agriculture. Production is heavily regulated and farmers are subject to inspections throughout the year. In order to ease and clarify legislation, Ordinance 83/2021 was passed on 5 January 2022. Through the amendment, cultivation of hemp for industrial purposes is differentiated from cultivation of the cannabis plant for other reasons. The new order only allows hemp to be grown outdoors, and prohibits growing plants in greenhouses or transplanting them. Transporting flowers, whether they contain seeds or not, isn’t allowed either. The minimum production area has been set at half a hectare, shutting out some small farmers.

All drugs will require a license from Infarmed I.P. Infarmed I.P. is an agency under the Portuguese Health Ministry, responsible for the regulation, control and evaluation of medicines and health products for the protection of public health.

As of June 2020 Portugal is working on draft legislation for the legalisation of cannabis for non-medical use. The current decriminalisation laws include cannabis with all other drugs like heroin and cocaine. The first step will be to remove cannabis from this list and make separate laws for it. Two parties have each presented their own draft laws to be voted on. The Left Bloc party is proposing State control of the entire process whereas the Liberal Initiative proposes little to no State control. What they do agree on is that there should be a limit on how much can be bought at any time, that places where you can smoke should be limited (not on public transport, not at work, not near children), health warnings and government control of dosages high in THC. This proposal has subsequently expired with the end of the parliamentary session in December 2021 and will have to be reintroduced at the next legislative session. The process of the legalisation of cannabis for adult use in Portugal is therefore lagging behind several other European countries.

Infarmed I.P. is the competent entity at the national level to establish conditions and grant authorizations for the activities of cultivation, production, manufacturing, employment, trade, distribution, import, export, transit, transport and detention by any title. Additionally, they grant authorizations for the use of plants, substances and preparations. All is included in tables I to IV annexed to Decree-Law No. 15/93, of January 22 2021, within the strict limits of the country’s needs, giving precedence to medical interests, veterinarian, scientific and didactic, according to Decree-Law No. 15/93, of January 22nd , and Regulatory Decree No. 61/94, of October 12th.

Some background on Portugal

Following the Portuguese seizure of Goa in 1510, the Portuguese became familiar with the cannabis customs and trade in India. Garcia da Orta, a botanist and doctor, wrote about the uses of cannabis in his 1534 work Colloquies on the Simples and Drugs and Medicinal Matters of India and of a Few Fruits. Fifteen years later Cristobal Acosta produced the work A Tract about the Drugs and Medicines of the East Indies, outlining recipes for bhang. Cannabis was introduced to Brazil by the Portuguese colonists in the early 1800s. Their intent may have been to cultivate hemp fiber, but the enslaved Africans the Portuguese displaced from the west coast of Africa were familiar with cannabis and used it psychoactively, leading the Municipal Council of Rio de Janeiro in 1830 to prohibit bringing cannabis into the city, and punishing its use by any slave. Portugal has an illustrious history of hemp cultivation. Its people have been using the plant to create ropes and sails for centuries, which may have contributed to their reputation as great seafarers.