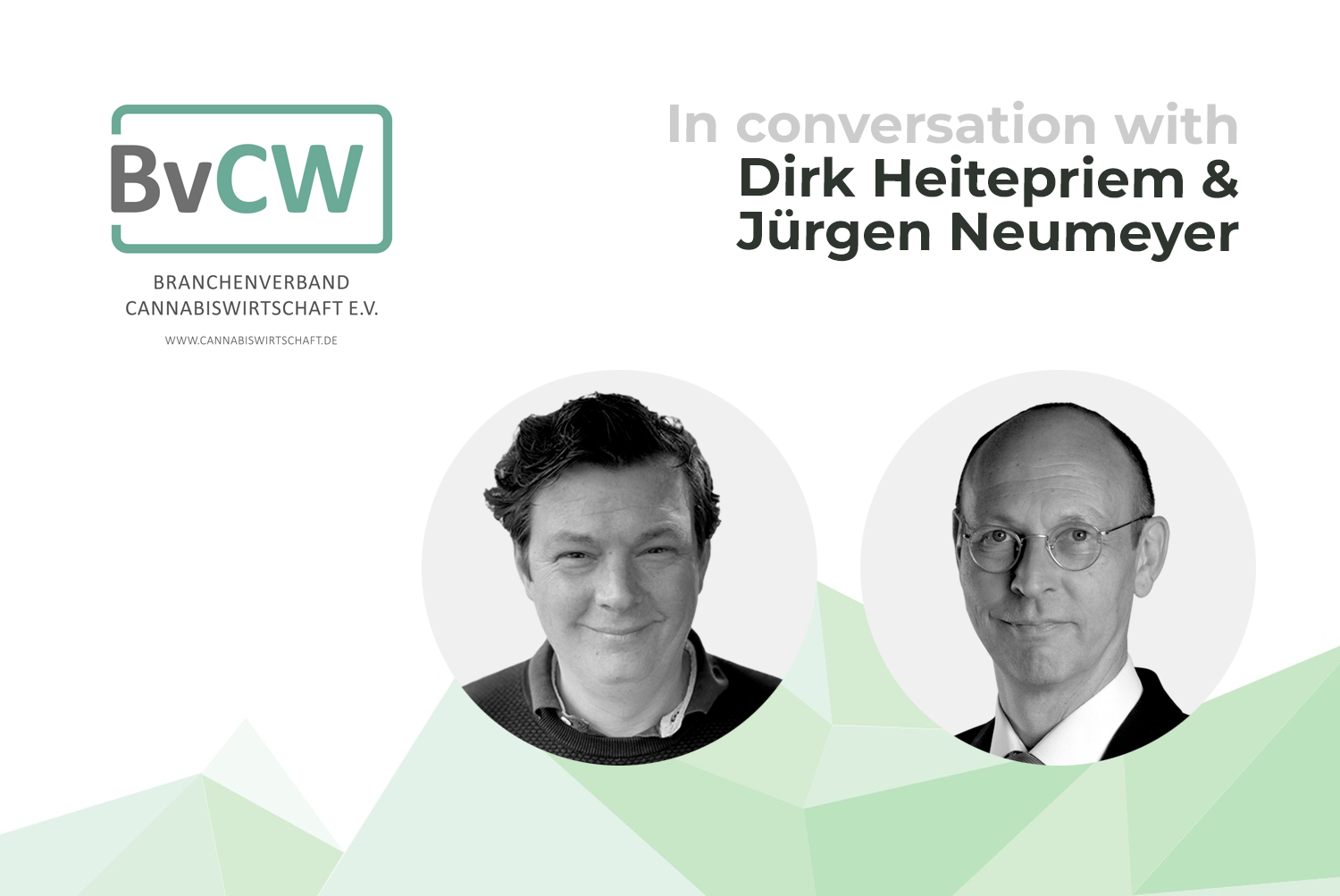 There were lots of promises by the new coalition government during the campaigning before the election in 2021. Everybody (well almost everybody) promised to support the legalisation of recreational cannabis for adults. One year later and there has been no / little progress, yet the Germans in general seem to accept this.

The German model and market is constantly being upheld as where the world of cannabis legalisation is going, yet very little has happened since the so-called traffic light coalition (one party is green, one is red, one is yellow– gotta love German humour) took power in 2021. For more information on how cannabis growing in Germany works, click here.

Deon Maas interviewed Jürgen Neumeyer and Dirk Heitepriem, respectively the managing director and vice-president of the BvCW, the German Cannabis Business Industry Association*, to ask what is going on, what has happened, what is in the pipeline and when Germans will be able to light up legally.

What does your organisation do exactly?

Jürgen: We are a classical lobbying organisation.  We lobby the interest of the German cannabis industry. We take the interest of our industry and work to promote it with politicians and the administration. If the industry stands together we can achieve more because we speak more or less with one voice. It also allows the opportunity for networking with each other. We have five divisions: ‘medical’, ‘CBD’, ‘trade, service and technique’, ‘recreational’ and ‘hemp and food’.

Dirk: We see ourselves as the voice of the German cannabis industry. There are quite a few of these organisations, but we are the only one that covers the whole spectrum. We have about 80 member organisations that are part of what we do.

The police do not arrest somebody when they have less than five grams of marijuana, yet the law says it’s illegal. Germany seems to live in a grey area at the moment.

Jürgen: We are not in a grey area. It is illegal. The prosecutor decides whether they want to prosecute or not. In some states it is pursued, in other not.

Dirk: Cannabis for recreational purposes in considered a drug which falls under the main laws of the UN. Therefore production, retail or usage is prohibited. The problem in Germany is that we have the 16 Federal states and each of these states are dealing with the situation differently. This situation is not acceptable. So, we find ourselves in the lucky position that currently we are discussing the “how and when” aspect of it.

There were lots of promises during the election about the legalisation. What is going on in Germany?

Jürgen: This process will take a minimum of 1.5 to two years. We have an illegal drug, we have people who want it to stay illegal, so special care needs to be taken about what the law-makers do and how they do it.

Dirk: It took a while to form that coalition and in the coalition two parties are very clear that they are for cannabis legalisation but the biggest party in the coalition has always been in-between, where some parts of them are pro and some not. The coalition contract was only published in December last year which means that we are now only nine months into the process which is not a lot for German politics. We are getting ready to publish the first white paper in October 2022 in a process that has already been clearly defined.

What will happen in the future and more or less what kind of a timespan are we looking at?

Jürgen: The process has started and it’s busy moving forward. First there will be a white paper presented by the government, then the Bundestag will discuss this and then the Second Chamber. We are now in the first step. In June the government started the first hearings to get information from experts and organisations about things like consumer protection, point of sale, safety conditions – the practical aspects of it.  So, there are a lot of issues that need to be discussed. Remember that it’s not only German law that’s at stake here, it’s also EU law and international law. By October there will be the first presentation to Ministers. After that they begin with the draft law which will most probably be finished by January 2023. There will most probably be hearings again. Once the draft bill is there the parliamentarians will put it through their various committees – health, finance, law, foreign affairs and more. You can imagine that this process will take its time. The law will most probably be approved by the Bundestag by the end of 2023 or the beginning of the following year. After that it goes to the Second Chamber where the 16 States decide on the law. Here there is no clear majority of the ruling coalition. Theoretically speaking there is a chance that the bill won’t make it, but usually they make deals and get support for projects and that gets the correct amount of votes. BUT…the nearer we get to the next election the more complicated this deal making would become.

Dirk:  Having the process in place by the end of next year is good, but it doesn’t mean that we have a market yet. The new law can only work when there is product to sell. What we are expecting is that we first have to build up production capacity and that will take time. From the early planning stage for the product to come to the market will take 1.5 to two years. I don’t see any imports happening because that is really difficult due to current laws, both domestic and international and I don’t think anybody has the ambition to accomplish this right now. So, my guess is that we will have the first product in the market in late 2024, early 2025.

Germany currently only has three legal growing licenses. Do you think the problem of not having enough product can be overcome by giving more growers licenses?

Dirk: The three licenses that Germany have at the moment is for medical cannabis. The three companies currently produce about one ton of cannabis per year. The conservative expectations for demand in Germany after legislation is between 300 and 400 tons per year and we are far away from that kind of a production level. So there first need to be discussions about quality and production standards before people can be allowed to grow for recreational purposes.

* Recently the BvCW published a position paper on track and trace solutions and why they are so important for the recreational market. This paper (and this kind of thinking) reinforces the work that Cannavigia does and the huge role it plays in building up an industry from scratch.