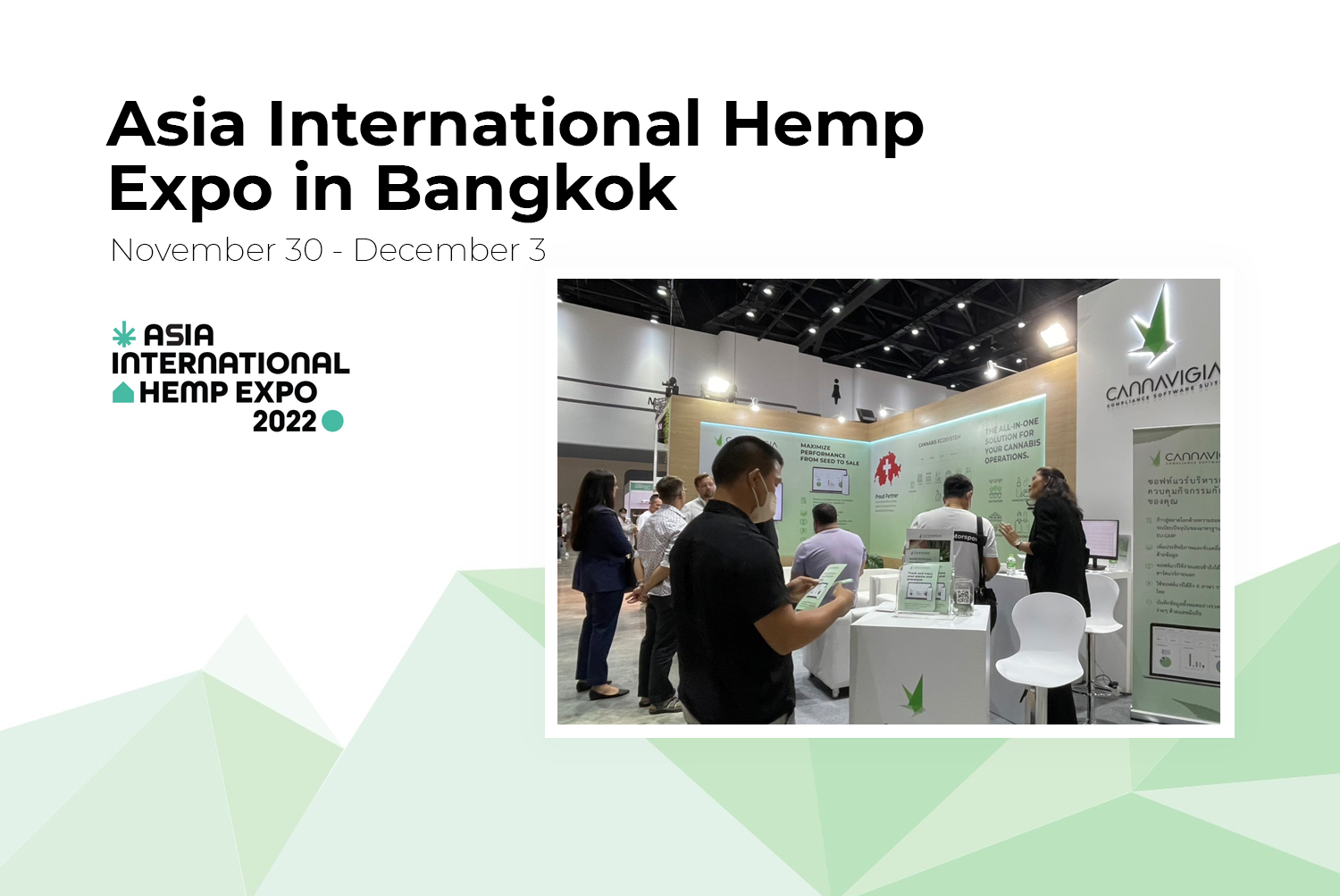 In June 2022, Thailand surprised the world by legalising cannabis. Against the background of this radical change, The Asia International Hemp Expo 2022 was held in Thailand in November. It is the only such show in Southeast Asia and was attended by 300 businesses from 12 industries. Cannavigia was there and brings you this report from our business development manager on the ground, Micheline Widler, who talks about the Expo itself and the present and future of cannabis in Thailand and surrounding countries.

What is the Expo about?

This is the first big expo since legalisation in Thailand, so there was a huge interest not only domestically but also internationally. There were attendees from Malaysia, India, Mongolia, Korea, Japan and more. In Thailand at the moment there are a lot of foreign companies keeping a close eye on the market and how it develops. There is a lot of domestic interest as well, obviously. At the beginning there was a lot of hurriedness, people wanting to jump in quickly and take advantage of the “green rush” because they didn’t know how long it would last. Now things have calmed down and people are more interested in discussing longer term planning, trying to collect data to optimize their operations, and looking at software to help with that. The whole attitude of people since the last event in March, has changed. In the past, the questions asked were along the lines of “what’s the difference between CBD and THC?”, whereas this time around it was more “what’s the difference between GACP and GMP?” Now you can have a long in-depth conversation because people are at that level where they want to take the discussion one step further. It wasn’t one of those let’s-get-high conventions, it was business to business and serious deals. There is a lot of growth.

The announcement that came on 9 June, which was the delisting of cannabis from the list of narcotics, was not a complete surprise. It was announced 120 days before in the Royal Gazette but everybody was expecting that there would be another set of laws accompanying the decriminalization. That did not happen. So, the surprise wasn’t the fact that it became legal, but that there weren’t any other laws supporting it. A lot of the current regulations shaping the industry have been added one by one after the decriminalization, making it quite hard to keep track of the current status.

Most recently an announcement at the end of November introduced the concept of traceability, specifying that licensed sellers, distributors and processors must track information on the origins, utilization and stock of controlled herbs at their premises. In the past months there have been stories of dispensaries from Koh Pha Ngan to Bangkok being inspected by authorities asking for invoices to show legal origin. The authorities are also trying to curb the recreational use of cannabis. The same announcement last month also prohibits the advertising and online sales of cannabis flowers, as well as sales of cannabis flowers for smoking on business premises, unless prescribed by a medical practitioner. The question now is if this will be enforced, and how strictly.

What is happening in the countries around Thailand?

There has definitely been a spin-off from what Thailand is doing. The neighbouring countries are keeping a close eye on Thailand, now that they have seen the economic opportunities of a national cannabis/hemp industry. Having said that, I think they will be approaching this very differently and on a much slower timeline than Thailand.

Thailand was able to get away with a “grey” recreational market due to its long history with tourism and its openness to alcohol and the party scene. This is not necessarily the case for the other ASEAN countries, a lot of which are majority Muslim. The governments of these countries have to be very careful of the internal reaction within their population. I think they will start with research trials and a more conservative approach, focusing strictly on the medicinal cannabis or hemp space. The interest that Cannavigia had as a company from these emerging markets was mainly around the compliance aspects of the software and how it can be used as a tool to encourage governments to take a step into the medicinal cannabis industry with a structured system based on data and traceability. Everybody is finding their feet and looking at what works best in their environment to gather the knowledge and tools to rally their different governments at the moment.

What was Cannavigia’s role in the expo?

Our CEO Luc gave a presentation about the company, the international standards in the cannabis space, GACP and its challenges and how our software helps bridge the different regulatory environments. That was a great success and tied back to a lot of discussions we had about the impact and effectiveness of our software on an international level in terms of export but also on a local level.

On a local level, given the lack of regulations in Thailand at the moment, our role was also to let people know the software is not just a compliance tool, but also a powerful tool in production management and quality assurance. During these early days in an industry that is still learning, data is so important, especially your own data from your own cultivars and your own site. This information can be used to improve your processes and increase your yields, which any business operator wants to do.

We had an interactive display set up so visitors could try using the software and see how easy it is to log various tasks and parameters on the app. Given that our software is available in Thai, made it a lot more approachable for local farmers who are concerned about teaching their team on the ground. That impressed a lot of people. Being a reliable and trustworthy product, I think this is the beginning of a great start for us, the industry and Thailand.

Interested in the Thai cannabis market? Read our Thailand country report – part 1 and part 2 – or reach out to us to ask your questions.