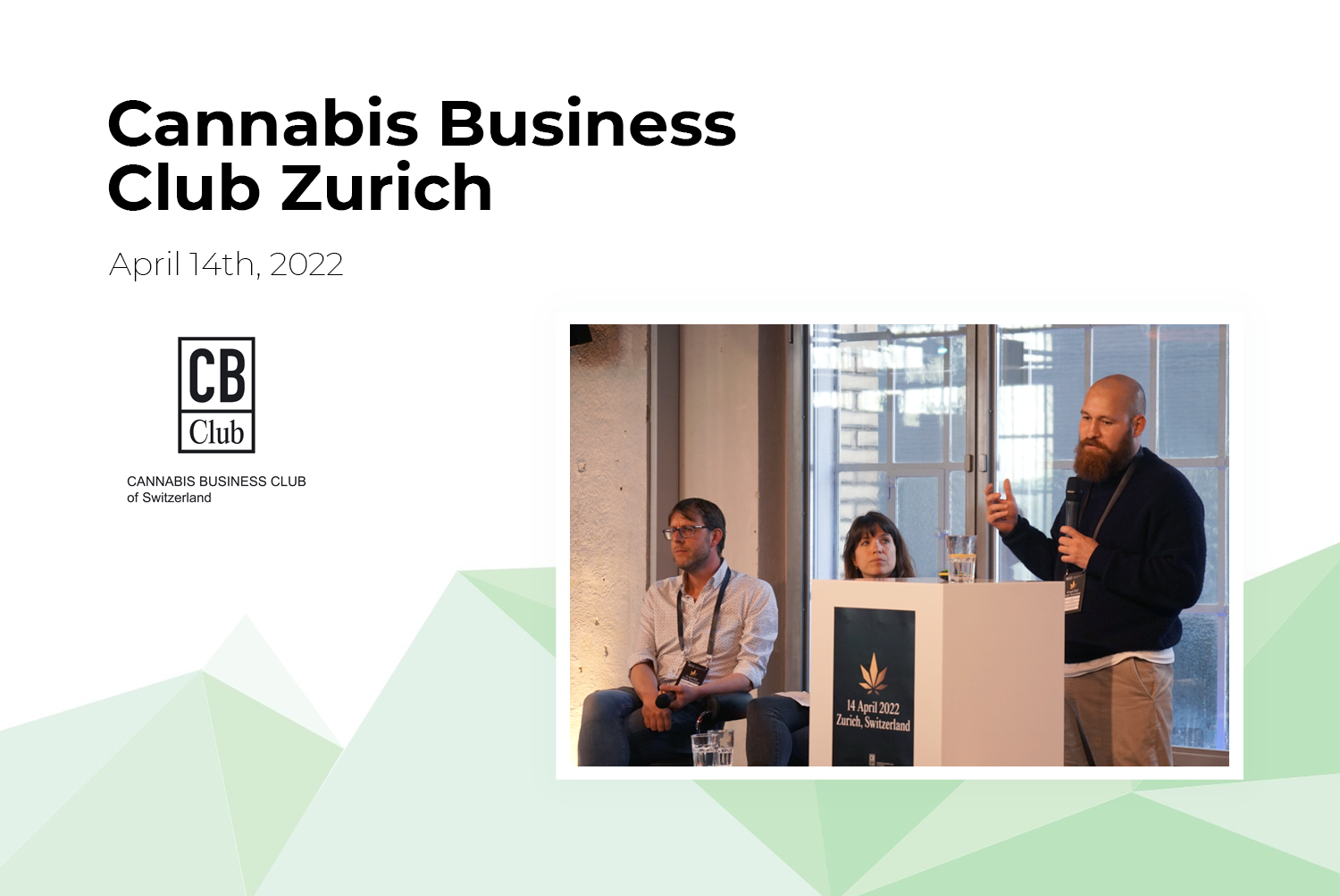 When Switzerland launches its pilot projects on cannabis use for adults  later this year, Cannavigia will be the official track and trace software of the experiment. At the same time the Netherlands will also be launching its pilot program. These are the first two countries in the world that have decided to lead the legalization process with pilot programs to determine the laws that will define the usage of cannabis in their respective countries. While the rest of the world will be watching the outcome of this experiment with bated breath, Deon Maas had a conversation with Pia Meyer, project manager who will be leading the project at Cannavigia, Arno Hazekamp from Legal Cannabis Coalition (LCC) who will be leading from the Dutch side and Lino Cereghetti from Pure Holding, the company that produces the cannabis for the pilot trials in Basel.  The three jointly presented a panel at the April 14, 2022 CB Club in Zurich on ‘Pilot projects on cannabis use for adults: an update from Switzerland and Holland’.

What will the role of Cannavigia be in the Swiss pilot program?

Pia: We will be playing a very big role. The Swiss government has chosen Cannavigia to be the official track and trace partner for the pilot trials. So the producers, growers, the pharmacies and social clubs will be able to use the Cannavigia software. The transparency aspect to build trust will be in play right from the beginning. In the end when it comes to legalization, the data that we can provide with the track and trace system means everything works according to the rules. Our role is to build trust in the system.

Why is it necessary to have pilot projects on cannabis use?

Arno: The Dutch opinion in general is that we just don’t know what legalization looks like. You can’t just decide to legalize something, do it and then just let it happen. It has happened in countries but it takes them years and years to figure it out. In Canada they gave all the power to companies with a license which is crazy because the free market means that everybody will just start competing with each other. This leads to problems with fraud and hostile takeovers and buying stuff from the black market. This makes people not stick to the rules because when commerce takes over there’s not a lot of fair play. We have learnt what has happened around the world and it is clear that there isn’t a model as yet that works, so let’s do an experiment to see how you have to organize things for them to work.

Lino: Switzerland has a different background, but the reasons are more or less the same. We have come to realize that the prohibition politics of the last few decades have failed. The Federal Commission on Narcotics as well as the Federal Council of Switzerland have declared these policies as failed. In Switzerland everybody seems to be on the same page that we need a new model and new regulations and the big question of course is how to regulate this. The pilot program hopes to figure out what model will work best to regulate the recreational cannabis market.

Arno: It’s more than just opening a shop and starting to sell product. There are a lot of things that need to be figured out.

Lino: So we try to figure this out with scientific studies and use it as a basis for future regulation.

Pia: Nothing in this scope has been done. Nobody really knows how to regulate this industry yet. The pilot program provides a way to gather scientific data whereupon regulation can be based. So, this will determine how stringent or relaxed legislation should be in order for the industry to flourish and make it easy for companies to enter the business. We need it in order to learn how to regulate.

There are countries who have not followed this path. Why is it different for them?

Arno: You can do it, but there are consequences. You are part of an international community – there’s the EU, there’s the UN, there are international agreements. You can go “we are legal” but you may lose EU subsidies or have other consequences. If you look at the US, it’s not legalized. People in the industry are having banking problems, insurance problems and many other bureaucratic issues. In Canada you have a huge black market, you have over production. People have to destroy some of their crops because of over production. It’s not working. Switzerland and Holland are the two countries that are seeing these problems and are working towards making sure that when they go legal, problems are sorted out beforehand. That’s why it’s called an experiment.

Lino: Doing it without the pilot programme may mean that it goes faster but it’s without the conscious regulating that we are doing.

What will happen if the outcome of the pilot programs are negative?

Lino: That can only happen if the studies are incorrectly conducted. If results are negative, it will make regulation harder. If we encounter a risk in this pilot program that we haven’t thought about, that will obviously be included. That is what these studies are there for. There are many people involved in this study, by the end of next year it will be a couple of thousand, and it will be unavoidable that somebody will have a bad experience. This is what happens when you put a lot of people together. This does not mean that cannabis is not regulatable. It just shows the reality of cannabis consumption in everyday life.

What is the difference between the Dutch and the Swiss programmes?

Why is the sharing of information between the two countries important?

Lino: The goal is to figure out how to regulate and seeing that there are differences in our studies it is very important for this information to be shared. This means that we can discover something that they didn’t or vice versa. Some countries have made some really big and expensive mistakes. It will be stupid and catastrophic to repeat these same mistakes. These mistakes were made so we can learn from them.

Arno: Initially every cannabis company was required to have a bank vault – a super thick, super expensive thing that was supposed to stand somewhere in the middle of the company. A lot of companies spent a lot of money on this until the government realised that it wasn’t necessary. If you are first going to let the industry loose and then make rules, there are going to be unhappy mistakes.

What can Switzerland learn from countries that have already legalized?

Lino: I think the challenge is learning about what it is to regulate enough and not over regulating the industry, so the consumer does not go back to the black market in the end. We want the consumer to be comfortable with the new laws. You can’t make it too cheap so it increases consumer numbers too much and on the other hand you can’t make it too expensive because then they go back to buying it illegally. Where should the line be drawn so the industry succeeds, but still protect both them and the consumer.

Arno: Under regulating and over regulating is the big issue. If things are too complicated, the price goes up. Do you have to have armored trucks every time you move a box of cannabis from place to place? If you under regulate and not have for instance the laboratories standardized and hoping that the industry will sort it out, we have seen there is no figuring it out. The final goal is that it’s a business and as a business it has to be worth your trouble and everybody has to like your product. If the black market decides to give everybody a 50% discount over the next five years to destroy this experiment – how do we prevent that? Even more, how do we respond to that? We are looking to make this business manageable.

How will Cannavigia customers benefit from the results of the pilot projects on cannabis use?

Pia: Cannavigia will also be learning from this pilot program. These new discoveries will obviously be incorporated into our product moving forward. Today we had a meeting with a lot of the stakeholders that will be part of the pilot program. They have already shared what they expect and what should be provided. Being a young company in a young industry I think these exchanges are super valuable because that is how we all learn. We can and will incorporated new features in our product all the time. The Cannavigia software is beneficial to the pilot program, but the pilot program is also beneficial to Cannavigia in learning about what the client needs and wants.