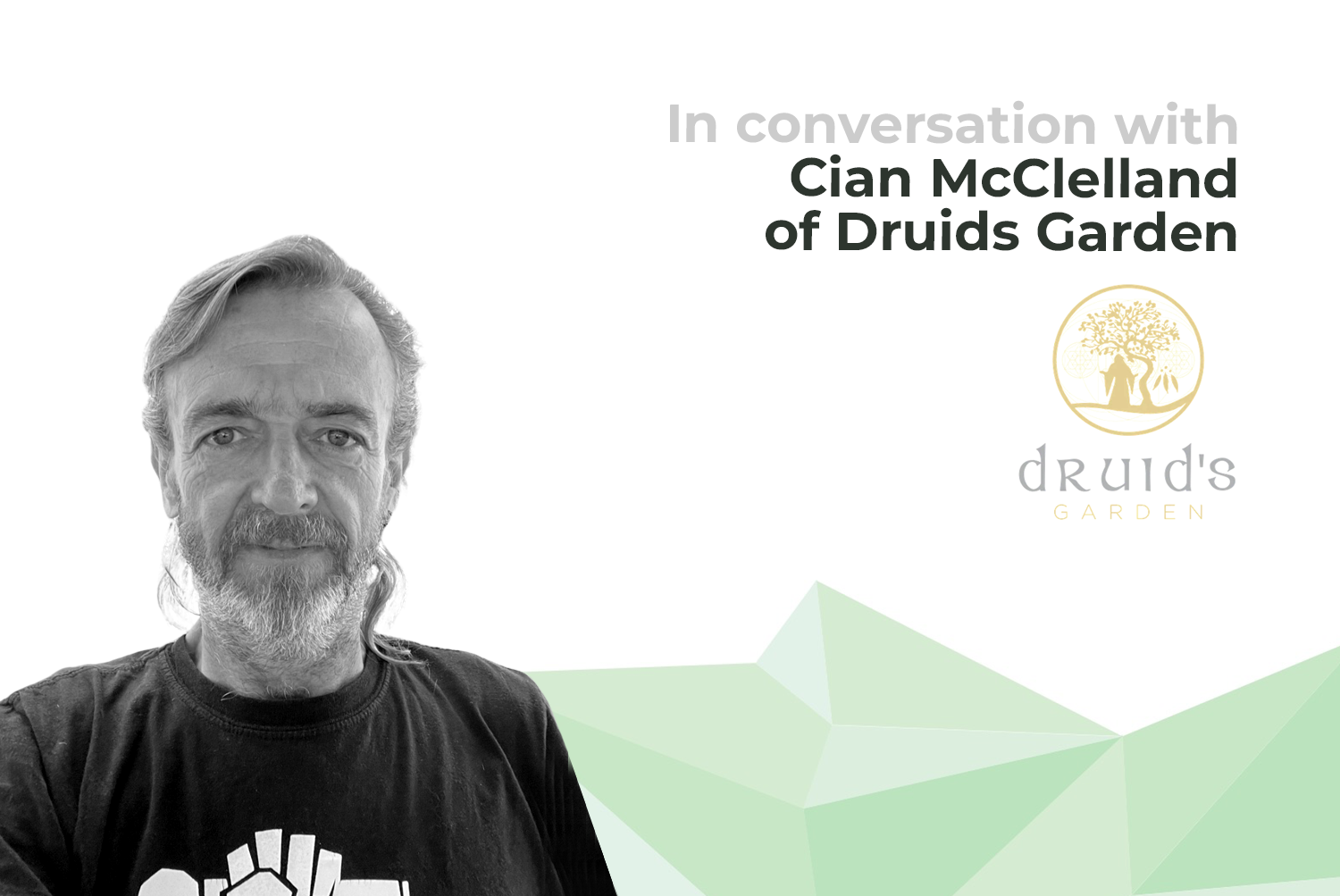 In South Africa an inyanga is a healer. The inyanga, other than the sangoma, is not bound by spirituality when it comes to their healing powers. The inyanga is a herbalist who cures illnesses in the same way that a Western doctor who specializes in natural medicine will do it. Changes in lifestyle has blurred the line between the sangoma and the inyanga – most sangomas are also inyangas, but most inyangas will stress that they are not sangomas. The change in how the world wants to be treated when they get sick, has also led to a rise in the status, popularity and choice of who will use their services.

Cian McClelland is an inyanga amongst other things and his company, Druids Garden sees themselves as a health and wellness company rather than just a straight up cannabis grower.

“I’ve been growing dagga in the back garden since I was 16,” says Cian (pronounced Kian), “so by now I know how to do it. It only been since 2021 that we have been doing it by the book.”

The background – from medicine to cannabis

Cian describes himself as coming from a business, film and television and project management of live events background, three industries that in South Africa are very closely related.

“I have always had an interest in traditional African medicine. So even though I was not directly involved initially in herbalism, it always formed the basis or at least part of whatever project I was working on. Through the making of television programmes and various social and community development programmes that I have been involved with I have met with a lot of traditional healers, the inyangas and the sangomas and I started learning on an informal basis from them how what works. So that led to me starting to combine medicine, agriculture and project management, which is basically what Druids Garden is. We started growing the herbs used in traditional African and Asian healing in 2017 and then in 2021 when we got our cannabis license, we added that to the crop as well.”

The hiccups in the beginning – money and indoor growing

Cian, like all growers we have spoken to, kicks off his list of problems by talking about money.

“We are in a newly developing industry and the biggest problem facing all of us is access to sufficient funding. Because everybody is running short of cash, you start cutting corners where you shouldn’t and it always comes back to bite you in the ass. The trick is finding the balance between risk and cash at your disposal. Scrimp and save doesn’t always work.”

Then he moves to a problem that is more country specific to South Africa (read our country report here), but perhaps still relevant to others:

“This indoor growing is a huge problem. We have always grown outside, now to be legal we have to be indoors in sealed units. Not only have we grown outside in the past but we have also grown local strands and seeds that have built up a resistance to natural enemies over generations. Now we are forced to use these foreign strains that are shitty compared to what we have. It’s not resistant so we are dealing with issues that we have never had to deal with before.”

The seed to sale compliance software

“Because we are dealing with all these new variables and variants and because we are running short on cash, we have to have tight control. We need to be in a situation where we can identify and correct problems in real time. The ability to log in live and do simple things like adjust the temperature remotely, has saved us many times.

There are other things about the Cannavigia software that works really well for us: The combining of all the data, the fact that everything is integrated in one package makes life so much easier that basically working with a modified Excel spreadsheet, which is what some of the packages offered out there is.

We looked everywhere and found the right fit for us and how we think as a company. We insist that the company’s dealing with our overrun production use this software as well.”

The problems that a new industry faces

“The government believes that cannabis will be a silver bullet for the economy and therefore has unrealistic expectations. They are expecting too much and we all know what happens when people expect too much: It leads to disappointment.

The will to make it work for the South African government is there, but everything is so slow. The Justice Department is very slow and so are the other departments that we have to work with. The regulations are showing teething problems, everything takes longer than planned. We even have to finish the whole building and everything on the farm before the license is awarded. There are too few people to enact the government laws, so you wait months for approval. The processes are slow because the people implementing it are unskilled and everybody is learning as they go along. So ja, the will is there but the enactment is challenged. But at least we feel that all the involved parties, including the government, is working toward the same goal – making it work.

Then, if you add the ego of growers into the mix, it makes for craziness. You have master growers that aren’t really master growers, people suing each other, hating… The combination of the deluded master grower and the venture capitalist is a bad combination.

“The legislators are dragging their feet with the legalisation of responsible adult use. South Africans are conscious of the benefits of cannabis. Black South Africans and Afrikaners have used this for centuries. The anti-cannabis demonstrations outside parliament, sponsored by some churches, have fallen apart due to disinterest.”

“Small growers are being squeezed out and the market is being stolen by big companies. As part of our community responsibility we are fighting this move. We are pushing hard to involve the community in our work and we have implemented low cost models to encourage the small grower, especially in rural communities. As a company social development is on the forefront. We continuously publish research and help to get growers going to make sure that no-one gets left behind.”