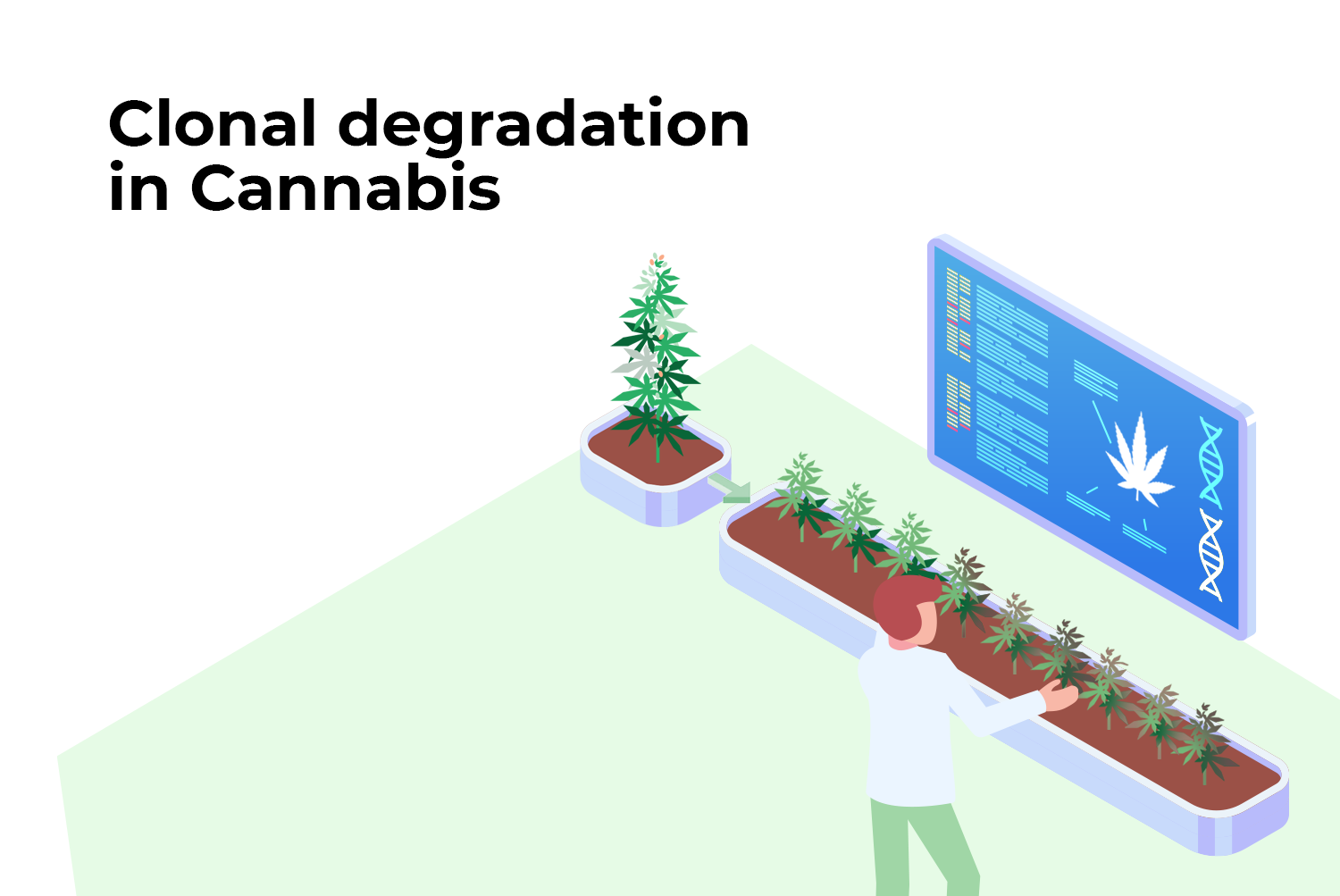 Clonal degradation; a fact or a myth

Cloning (vegetative propagation) has been widely utilized in propagating domesticated plants to maintain valuable genotypes. This process has been useful in producing genetically identical and phenotypically similar plants to the parent stock. As a way of propagation, cloning serves to preserve the properties of the parent plants and save the growers the stress of breeding to find the right genes to meet their needs.

The recent interest in rare cannabinoids and their ability to trigger a better effect at the cannabinoid receptors has shown how cannabis therapy and medicine go beyond CBD and THC. To produce these strains, cultivators put the plant under several conditions to optimize the production of certain cannabinoids and traits. After identifying such a strain, these plants (the mother plant) are kept in a vegetative state while cuttings are obtained and cultivated. This helps to promote the selective breeding of high potency cultivars.

Clonal degradation in cannabis has evolved as one of the scariest nightmares of cannabis cultivators after cannabis laws and reforms. Although cloning has evolved over the years as one of the most effective methods of propagating cannabis plants with unique features, recent reports show it may be subject to degradation or decay.

Clonal degradation or decay is when cannabis clones lose their uniqueness in producing certain properties or compounds, including cannabinoids and terpenes. While this may be rare in cannabis plants, certain reports show how cannabis clones can lose their cannabinoid and terpene profiles after several years of cloning. Although studies on clonal degradation in cannabis plants are limited, this is a budding problem in the cannabis industry that must be addressed accordingly. Generally, all plants that undergo an extended period of vegetative propagation or cloning are most likely to demonstrate a decline in plant vigor.

Before now, cannabis clones are described as a replica of the mother plant. They possess the characteristics of their parent plants and serve as invaluable ways to produce the best results when looking for rare cannabinoids and terpenes. However, grower reports and scientific findings show that producing cannabis plants via cloning may introduce new plants into the environment and can lead to a loss of important terpenes and cannabinoids in the long run. Cloning has served as an important method of cultivating cannabis plants or cultivars for medical and recreational purposes.

This is false as no two clones are exactly alike genetically. Clones are believed to be exact replicas of the parent plant. Since they are not propagated from seeds, they are expected to share the same gene pool with the parents and maintain a fairly constant cannabinoid/terpene profile over a long time. Most growers believe the cannabis plant is incapable of exhibiting intraplant diversity.

Interplant diversity is a situation where different parts of a plant can exhibit different genetic buildup, probably due to continuous breeding or cutting activities. For example, a continuous cutting of some apical parts of the plant can trigger mutations that may affect cannabinoid and terpene-producing enzymes.

Genetic variations are not only common in sexual reproduction, as genes are responsible for several activities in a plant. These genetic mutations are small slight changes that keep accumulating over time and produce a shift in the initial genetic identity of the cloned plant. Clones can undergo mutations and produce new variations of the same plant.

How does clonal degradation in cannabis plants happen?

These observable changes in the terpene and cannabinoid profiles are triggered by mutations in the genetic sequences of the plants. These mutations can affect important enzymes responsible for synthesizing these active compounds.

Cannabis plants can undergo an irreversible somatic mutation in the absence of sexual reproduction due to excessive cuttings. This finding was supported by Muller’s ratchet theory of 1974 which states that species accumulate irreversible somatic mutations in the absence of sexual reproduction. The longer the mother plants are kept in a vegetative state, the higher the possibility of acquiring irreversible mutations that can change the cannabinoid/terpene profiles.

Note that each plant comes with its unique fingerprint (genetic makeup) that may impact its biological activity in nature. The more this balance is disrupted via cuttings, the plant becomes more susceptible to clonal decay and degradation. Several spontaneous mutations can occur in the cannabis plant as independent branches grow.

Researchers were able to determine the genetic diversity of different plant parts. According to their findings, the leaves, stems, roots, and flowers of the same cannabis plant exhibit genetic variation (intraplant variation). The study confirmed a significant genetic variability in a single cannabis plant. This means that the plant roots, stem, leaves, and flowers exhibit an independent genetic makeup and can produce different plants when propagated.

Their findings show that the top of the plant had the most variants, followed by the bottom, while the middle had the least. Propagating a clone from these plant parts will most likely produce a genetically different plant from the mother plant.

The cannabis plant is an annual plant. It lives until its flowers are pollinated, and seeds are produced. This occurs in a few months, and the plant dies naturally. In cloning, most cannabis plants are maintained in an artificial vegetative state and replaced periodically with clonal propagules that can extend their lifespan to several years or even decades. The more this plant is maintained in this artificial vegetative state, the more it is likely to experience a declined vigor and accumulate more deleterious mutations due to the absence of recombination for a long time. Prolonging the lifespan of cannabis plants and constantly pruning clonal cutting can lead to observed plant decline.

Clonal cuttings are most likely to inherit mutations from the several cuttings in the plant and give rise to a new plant.

Clonal degradations are caused by mutations that the following factors can trigger;

Environmental factors like soil nutrients, water, humidity, and exposure to light can affect clonal vigor and may trigger mutations in the clones. These environmental factors/stressors serve as the trigger for clonal degradation. If you are keen on preventing clonal degradation, then factors like inconsistent lighting cycles, incorrect soil pH, underwatering, and underfeeding should be monitored correctly. These parameters can be measured accurately with Cannavigia’s cultivation module. It allows growers to automate, track and monitor their cultivation in real-time.

Age of the mother plant, long-term pruning from the top

Prolonging the vegetative cycle of the mother plant plays a critical role in clone vigor and performance. The longer their duration and number of cuttings, the higher the chances of mutation. Note that constant cuttings can lead to germline mutation, which can damage plant genetics if not handled correctly. Growers can try replacing mother plants with middle region clones as this can minimize mutations.

The best way to avoid this is by observing and keeping track of the plant genetics from cuttings. This will ultimately help keep the growers abreast of the latest developments and how to deal with them. Our cultivation module is equipped with the right tools to index, compare and track plant genetics.

Difference between perennials and annuals

Cannabis is an annual plant that produces seeds in a few months. The plant is expected to complete its lifecycle and rest for the other parts of the year. The mother plant is often artificially prolonged to remain in a vegetative state for a very long time, thus, increasing its chances of undergoing mutations inherited by other parts of the plant. The mother plant should be allowed to flower and seed after some time to help preserve the genetic makeup of the plants.

How clonal degradation can affect the terpene/cannabinoid profile

Mutations can affect the function of genes responsible for synthesizing terpenes and cannabinoids. Some researchers successfully understand the connection between clonal propagation and the reduced activity of CBDA synthase (CBDAs) and Olivetol synthase (OLS). These enzymes are important for synthesizing CBGA (cannabigerolic acid) and CBDA (cannabidiolic acid). CBGA is one of the most important precursors of medically important cannabinoids. It is often referred to as the mother cannabinoid since it is one of the first cannabinoids produced by the cannabis plant. A faulty CBGA synthesis can deal a great blow to the overall cannabinoid cycle of the plant.

These are important terpenoids from the cannabis plant and are responsible for several therapeutic benefits.

While clonal degradation in cannabis plants is a big deal in cultivation, it is something that can be handled with the right tools. Farmers will need to utilize the power of tools that can monitor the plants and provide correct information without stress. The Cannavigia cultivation module was designed for such a task. It can monitor strain reliability, determine when plants are losing their cannabinoid or terpene profile, and also monitor the environmental parameters on the farm, with IoT devices for example. Read more on how to use technology for your cultivation here. It also comes in handy in monitoring plant growth according to GACP standards and monitoring cannabis cultivation in real time. You can learn about Cannavigia’s cultivation module here.