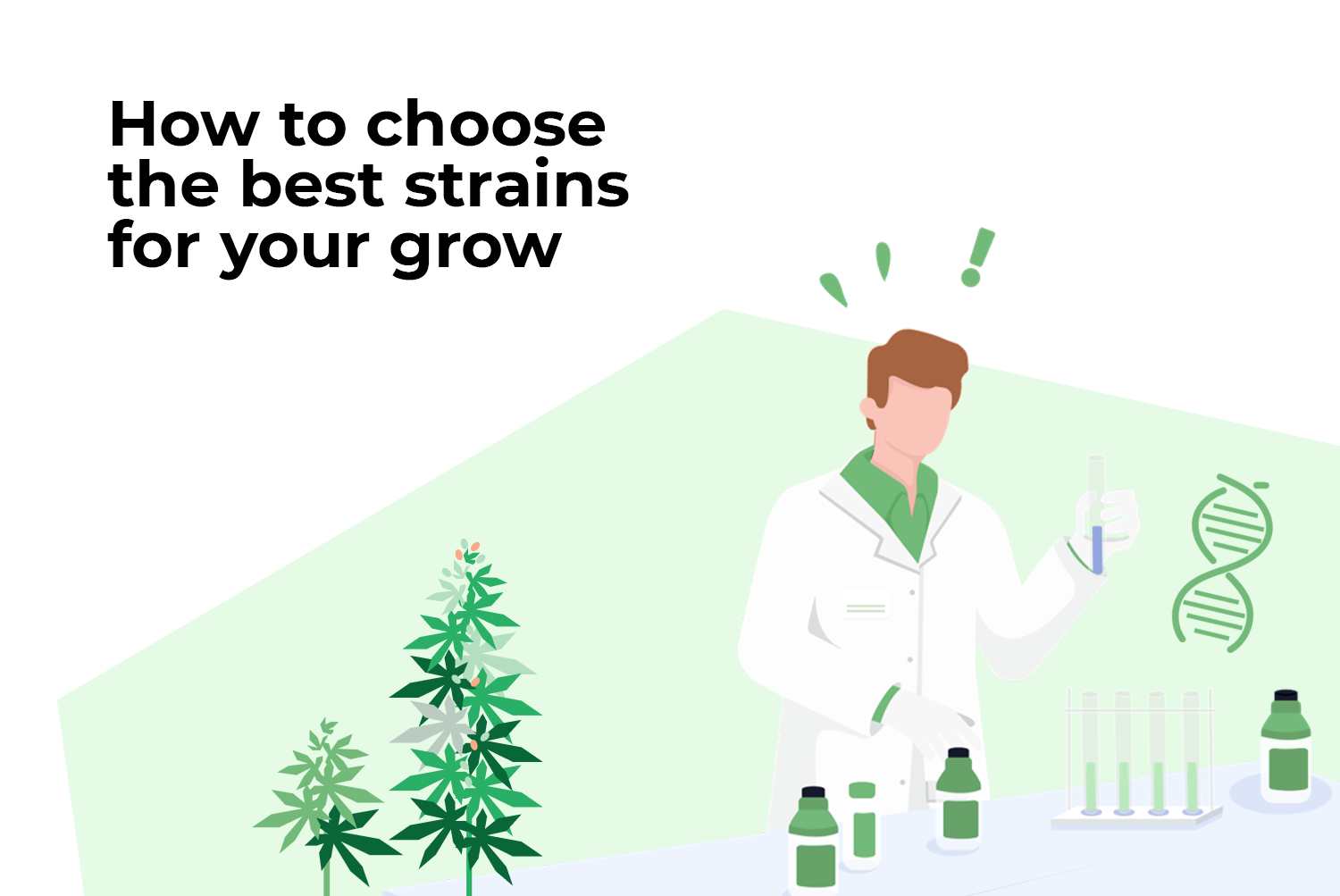 Cannabis growers and final users are always faced with the dilemma of choosing the best strains that meet their needs. This is largely sponsored by the several cannabis laws that emphasize the use of non-THC varieties for medicinal and recreational purposes. This and many more have led to the chemovars vs. strains debate.

Cannabis is a plant with several therapeutic compounds. Research shows over 100 cannabinoids, 120 terpenes, and over 30 flavonoids, most of which can interact with receptors to provide one therapeutic benefit or the other. Unlike medications created from synthetic compounds, each component of the cannabis plant tends to have a unique interaction with the cannabinoid system, which cannot be neglected. Their ability to engage multiple targets is one of the best things that makes cannabis an invaluable addition to the pharmaceutical world.

Since the earliest discovery of cannabis and its therapeutic potential, scientists have tried to classify the plant based on several criteria, some of which have been disregarded due to inadequate or shallow considerations. Before we dive into cannabis strains vs. chemovars, it is important to note that no cannabis classification is entirely wrong. They were simply classified based on the available information at that time. For instance, the information surrounding Sativa vs. Indica is not completely inaccurate since biologists only classified the plants based on physical parameters like the leaf shape, color, plant height, smell, and time to grow. Today, the more sophisticated growing terms coupled with the terms stated by legalization have continued to call for a more comprehensive classification hence the chemovar vs. strain debate.

The major challenge with the earliest classification stemmed from how they never considered the chemical composition or THC potency of the plant, which now plays a major role in cannabis legalization and adoption for medical and recreational purposes.

Classifying cannabis based on chemovars and strains appears more of a satisfying classification since it gives breeders and users the chance to understand the cannabinoid profile of their plants and the possible effects to expect from them. It gives a more defined characteristic that takes into account the plant’s origin and its cannabinoid and terpenoid profiles, which are, for now, regarded as the most important parameters in the cannabis industry.

Cannabis classification goes a long way to bring more transparency into the supply chain. This is one thing we aim to achieve with our cannabis compliance software. At Cannavigia we believe discussing chemovars vs. strains will give a more detailed description on the plant and how it can affect users. We serve as a friendly consulting company that you can trust anytime of the day and we are happy to advise you on the best genetic starting material available.

Cannabis cultivars refer to cultivated varieties. These are plants that have been selected and improved with time by humans. Cultivars often possess desirable characteristics that make them invaluable to the cannabis industry. On the other hand, strains refer to a genetic variety or subtype of a microorganism. It is not common in plants but is mostly used to depict genetic variation or modification. On this note, the right term to be used is cannabis cultivars and not strains. We will stick to the usual “strain” for this article and not cultivars.

Information from Leafly shows there are over 6022 strains classified as Indica (864), hybrid (3797), and Sativa (547). These strains are based on the physical appearance of the plants and not necessarily the chemical composition. Indica strains are mostly short and stocky, with green, bushy, and chunky leaves that grow wide and broad. They have a higher CBD level than their Sativa counterparts. The hybrids are just a combination of Indica and Sativa and their features. Most hybrids are grown as a manipulation to increase the overall concentration of a particular cannabinoid. For instance, newer hybrids focus on the concentration of rare cannabinoids like THCV, CBGa, CBN, and CBC.

Although cannabis strains may have some unique effects, they provide a less comprehensive form of classification and can be misleading. For instance, Sativa, hybrid, and Indica strains may provide a similar antidepressant property thanks to the CBD: THC ratio in the plant. One major setback in using strain classification is how they only focused on CBD and THC levels leaving other cannabinoids out of the mix. Although this may be supported by how some states only require the disclosure of CBD and THC information, it should be noted that cannabis medicine and therapy go beyond CBD and THC. It is a complex reaction that should take all cannabinoids, terpenes, and flavonoids into cognizance.

Although this is a more technical classification farmers may experience some difficulties in trying to name or understand the plant. Cannabis chemovars show a better way of classifying cannabis plants since it considers the plant’s total chemical composition. This gives the breeders and final users a chance to understand the right composition of cannabinoid-terpenoids in their products, thus explaining the possible effects on the body.

Chemovars refers to the breakdown of cannabis species based on their chemical composition. Chemovar classification has the edge over strains and cultivars since it gives the users and breeders an idea of the expected chemical composition of the plant, its possible acceptance in a region, and how it can be of possible use for medical and recreational purposes.

This method was adopted to suit medical and recreational users’ varying needs and create hemp products that comply with the state rules and regulations. While cannabis/marijuana may still be considered a class one substance and illegal in several regions of the world, some chemovars are treated as medicinal plants.

The first case of cannabis classification as chemovars was stated in a 1973 paper authored by Ernest Small and H.D Beckstead. They introduced the idea of placing cannabis plants according to their cannabinoid content, which has continued to serve as a benchmark for cannabis growers and users.

Which is better; Chemovars or Strains?

Each chemovar has a unique characteristic that makes it better adapted to meet the ever-growing market needs. The fact that it takes into cognizance the cannabinoid profile of the plant makes it even a more comprehensive and accurate way of classifying cannabis plants.

Chemovars give breeders the chance to know what to plant and how best to harvest it when the time is right. The chemovar classification applies to all aspects of the plant regardless of the part used for extraction. It gives users the chance to critically analyze the plant in light of its major chemicals.

While identifying cannabis plants as chemovars is more professional, it is easier to identify them as strains. Strains give more detailed information on the plant’s origin, its appearance, and possibly the cannabinoid concentration in the light of CBD-THC. This is enough for marketing purposes except in cases where the customers are interested in the science behind their favorite products.

What does this mean for consumers?

Classifying cannabis plants as strains or chemovars allows consumers to make an informed choice on what they need. It also gives policymakers a chance to create the right policies for their region. The Sativa vs. Indica debate or strain vs. chemovar argument is for the scientific community to worry about. Consumers are free to use hemp plants that contain less than 0.3% THC or cultivate cannabis plants with rare cannabinoids.

Choosing the right seed that meets this need may be a thing of struggle, and that is where Cannavigia comes into the picture. Our cannabis consulting services focus on advising farmers and manufacturers on integrating GACP compliant documentation, provide the right starting materials for them and also keep them abreast of latest developments in cannabis cultivation and processing.

Our modules focus on cannabis cultivation and manufacturing, which are two of the most important critical compliance points in the cannabis industry. While our cultivation module can automate, track and monitor cannabis cultivation to increase yield, our manufacturing module offers you a full transparency and traceability over further processing of cannabis raw material into value-added cannabis products like extracts, oils and edibles.

Feel free to contact us or book a demo to see how our compliance software works. We will love to hear from you soon.