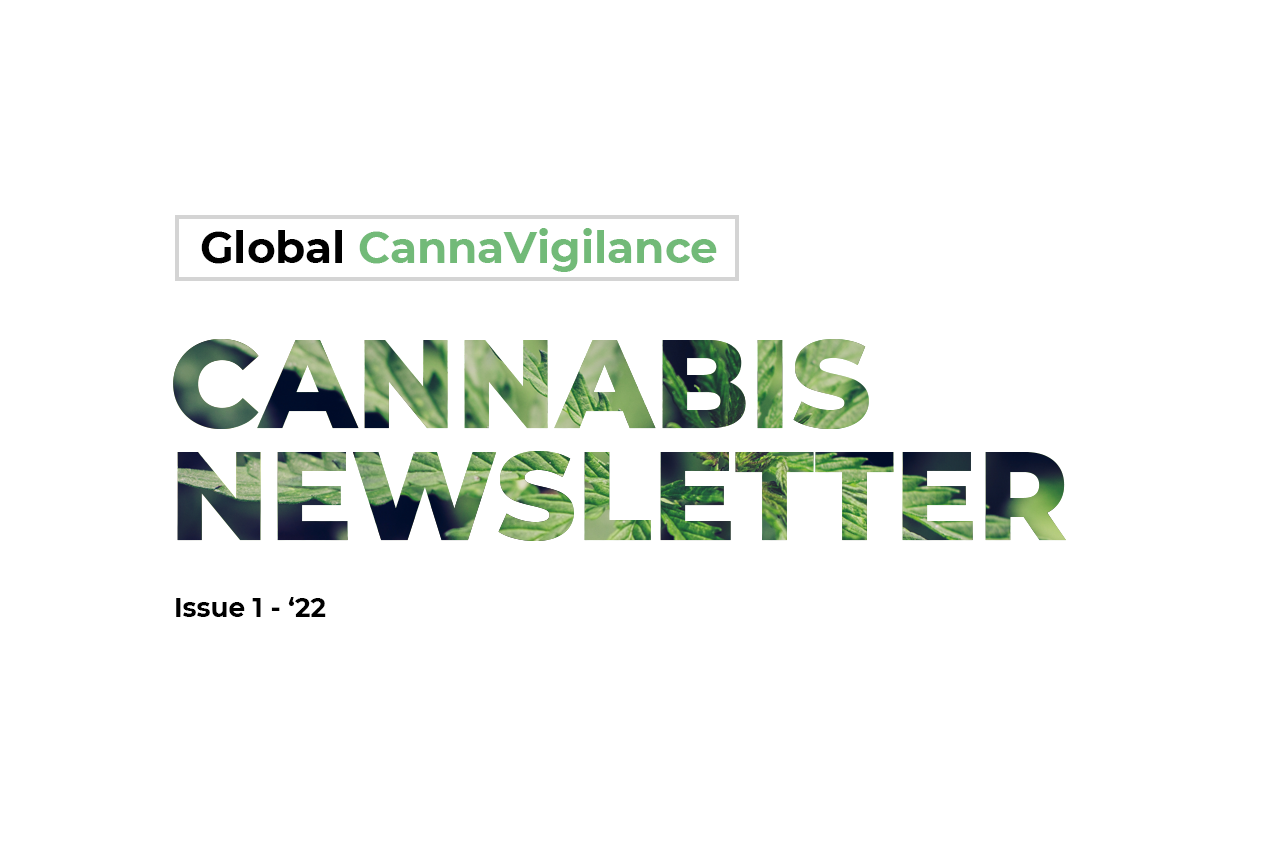 Greetings and salutations from Cannavigia. In our continuous effort to bring new services and ideas to our clients we have decided that we will start our own newsletter. This newsletter will cover what we consider the most important events in our field and will come out every two weeks. You can read our summary of the events or if you want more information you can click through on the highlighted part to get the full story from the original source. If you want to subscribe to get it directly in your inbox, you can click here.

Malta has become the first country in the EU to legalise the use of marijuana for recreational purposes, skipping the queue and beating Luxembourg and Portugal to the post. According to the Times of Malta, the Maltese parliament passed the Responsible Use of Cannabis bill with 36 votes in favour and 27 against. Possession of up to seven grams of the drug will be legal for those aged 18 and above, and it will permissible to grow up to four cannabis plants at home, with up to 50g of the dried product storable. The legalisation has not been without hiccups though. The Maltese Association of Psychiatry have launched a campaign as well as a collection of 57 Church-led institutions and NGOs. The opposition Nationalist party has criticised the reform, saying it will “normalise and increase drug use” in the country. The Maltese Association of Psychiatry has now come forward with a series of demands, amongst other the lifting of the age for legal consumption from 18 to 25 and ” a well-funded campaign on the health of the nation, with a big push towards the promotion of regular sports, arts and music in schools”.

Burger King gave us the meat burger that wasn’t meat, now BioHarvest Science wants to give us the cannabis that’s not cannabis, according to Forbes Magazine. They claim that a new technology is allowing them to produce full-spectrum cannabis without growing the plant itself. The biomass in question was created using the company’s proprietary BioFarming technology platform, which allows it to grow natural plant cells in bioreactors. BioHarvest’s biomass is in fact a full-spectrum product, meaning it features most of (if not all) the chemical compounds found in traditional cannabis.

Germany’s cannabis users’ and -farmers’ joy at the so-called “traffic light” coalition that came into power to replace Merkel in November 2021 may be short lived as the three parties (who all agree on legalisation of cannabis for adult use), have decided that it’s not a priority and will therefore not be rushed through. The FDP is of the opinion that “the fight against the pandemic has priority” and the SDP said “currently it is not a good time for a cannabis bill.” This according to the Berliner Zeitung.

The origin of the species

For those interested in the ancient history of cannabis, Science Advances did the research and solved a few late night discussions. (Spoiler alert) Cannabis sativa was first domesticated in early Neolithic times in East Asia and all current hemp and drug cultivars diverged from an ancestral gene pool currently represented by feral plants and landraces in China. On the basis of distribution and archaeobotanical data, a wide region ranging from West Asia through Central Asia to North China has often been suggested as the origin of cultivation for the plant, with its later spread worldwide coinciding with continuous artificial selection and extensive hybridization between locally adapted, traditional landraces and modern commercial cultivars. Clandestine drug breeding and the propensity of domestic plants to become feral (and possibly to have admixed with their wild ancestors) have contributed to the difficulties for reconstructing the species’ domestication history.

Advice from the elders

Growing legal cannabis is a first generation pursuit at the moment and this means that there are no elderly statespeople to serve as guides and gurus. Knowledge is in short supply and mostly those in the know do not want to share in case the pupil surpasses the teacher. So when we do stumble across something that is even marginally educational, we sit up and take note. Here are some tips from Rolling Stone, a magazine traditionally more closely associated with using cannabis than growing it.

Thailand, a country renowned for its draconian drug laws that include the death penalty has also slowly started moving towards more lenient cannabis laws. As with many other developing nations the reasons given is that it will allow local small scale farmers to benefit and it will stimulate the rural economy as well as lead to money flowing into government coffers. The Bangkok Post offers this positive insight. Further more, the Department of Thai Traditional and Alternative Medicine plans to have local cannabis strains registered as a national heritage item before seeking Unesco recognition. The move will help de-stigmatise the plant away from being an illicit drug under the original anti-narcotics law.

Small scale growers in California are complaining that they are on the verge of bankruptcy because legislation. Large scale growers are over producing which has led to a huge drop in price, but the cultivation tax has stayed the same. This means a much smaller profit margin. According to CBSlocal, quite a few of the new regulations are not working well in practise and has led to a rise in the purchasing of illegally grown marijuana. Of the 10 000 initial small growers, only 2 000 remain.

A change in the medical marijuana laws in Czechia will lead to a more relaxed attitude to prescriptions by doctors and more grow opportunities for farmers living in the country. For the first time private subjects who have medical reasons for consuming it, will be allowed to grow their own. Any product with THC of less than 1% will not be considered an addictive substance and therefore excluded under any drug laws.

Baboon vs. badger, NFT vs. cannabis

The Nasdaq Stock Market is an American stock exchange based in New York City. It is ranked second on the list of stock exchanges by market capitalization of shares traded, behind the New York Stock Exchange. They recently had a piece of writing where they compare the possibility of making money from NFT shares compared to cannabis shares. The cannabis industry is much more evolved than the NFT market, so there are many more ways for investors to gain exposure to it and they do arrive at the logical conclusion that cannabis is the better option.

On Dec. 13 the pharmaceutical giant Pfizer acquired the biotech company Arena Pharmaceuticals, a company that is pioneering research in gastrointestinal diseases using cannabis. Pfizer is not the first pharmaceutical company to invest in the medicinal potential of the marijuana plant, but it is the largest. Based in New York City, the multinational holds the most assets, valued at $167 billion and is one of the three major Covid-19 vaccine manufacturers.

A look down under

Australia has not featured in any cannabis related issues for a long time, silently going about doing their sunshine thing while the rest of the world freezes. The ABC network in Australia did a round up of what is happening in the market with growing for medicinal purposes, chances of legislation and what the industry’s expectations are over the next year or so.