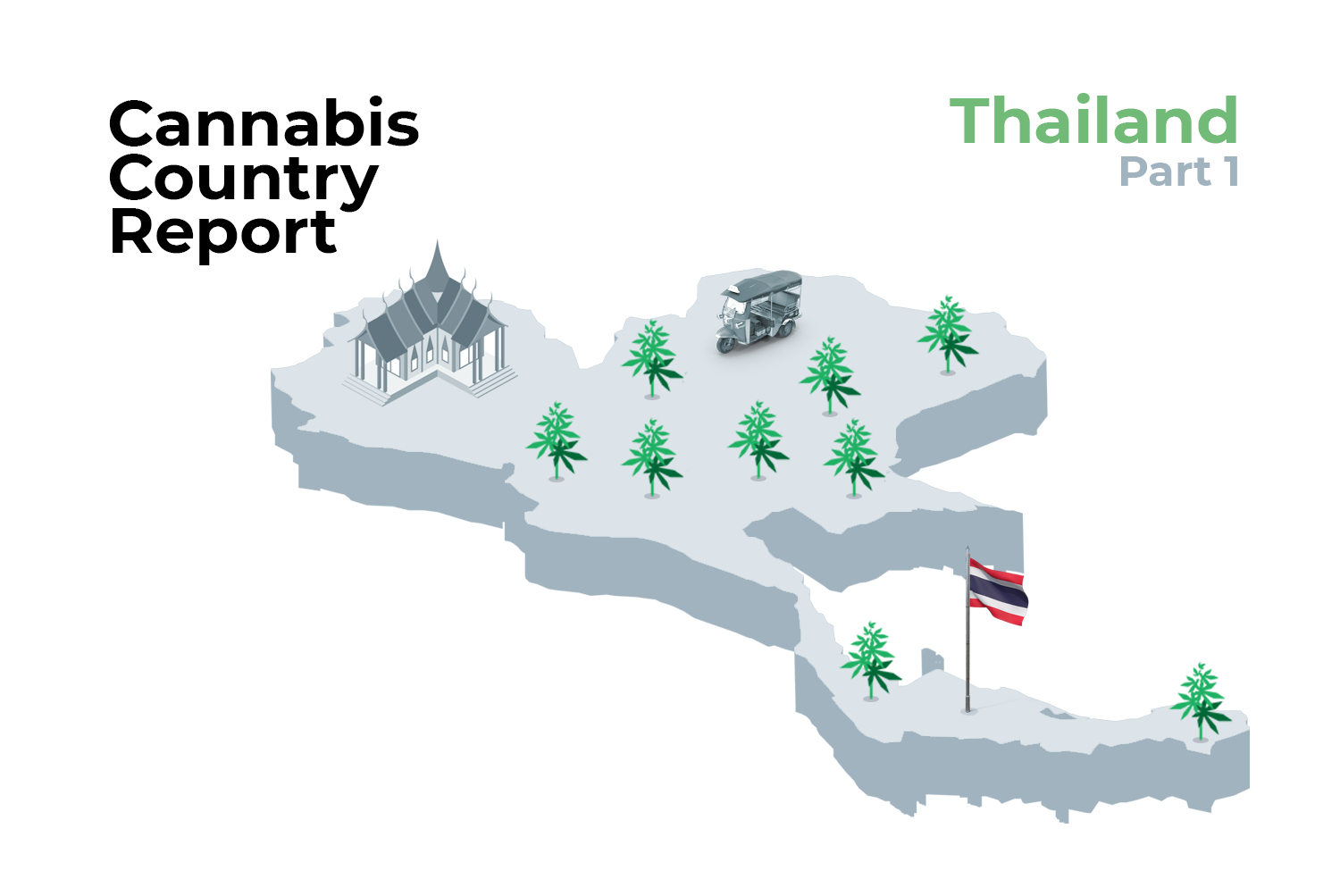 Thailand made headlines when it became the first country in Southeast Asia to decriminalize cannabis by removing the plant from its Category 5 Narcotics list. The situation in the country has been confusing to say the least, with many laws coming in to effect on the go. The most important of which is the long-awaited Cannabis Bill.

In September 2022 the Cannabis Bill that was supposed to add further regulation to the cannabis industry in Thailand, was rejected by parliament on the grounds that it did not include enough provisions to prevent the recreational use of cannabis. The bill was forced to be withdrawn from the agenda by a vote of 198 to 136 with 12 abstentions.

What this means is that the cannabis law in Thailand is an even darker shade of grey for the moment. The current Wild West-stance that the cannabis market managed to get to within a few months after Thailand’s lifting of restriction earlier this year may well continue until the next revision of the Cannabis Bill.

The next part in this series will cover in detail the current legal situation in Thailand and how to actually get a license given current legislation. But in order to get the bigger picture, let’s take one step back and start at the beginning.

The history of cannabis in Thailand

While cannabis grows wild in Central Asia and the Indian Himalayas, its origin in Thailand is unclear. Some experts believe that it was introduced into the region by Indian merchants, who also brought along the term ganja, which is derivable from the Sanskrit word gunja and is reflected in the vernacular name in the following southeast Asian countries:

Traditionally, cannabis has been used as a component of food, as a spice, for its fibres and for its medicinal properties long before it was condemned by politicians and police. The best-known historical example of cannabis being used as a spice in Thailand is boat noodle soup, where it is the root that is traditionally infused in the broth.

Hemp products and textiles, too, were a common sight long before prohibition of the plant in the 1930s. In early Muay Thai fights, hemp handwraps that ended in seashell-shaped knobs on the knuckles were used as part of the sport. It was eventually replaced by Western-style boxing gloves in the 1920s.

Probably the most documented and well-preserved aspect of traditional cannabis use in Thailand is its use in Thai traditional medicine. Thailand has used cannabis in various medicinal formulas since the reign of King Narai the Great of Ayutthaya (1656-1688).

The Vietnam War and the Global Influence of Thai Stick

During the Vietnam war, The United States constructed five military bases in Thailand, making it the main base for US soldiers. It was also the place where they all went when they had furlough. It is estimated that at most times during the war, there were more US soldiers in Thailand than there were in Vietnam. Cannabis was a popular indulgence amongst the American soldiers and a lot of them took the habit back home. Despite the existing Cannabis Act of 1934 which prohibited the import and export of cannabis, this was the start of Thailand’s underground cannabis trade and the influence of “Thai Stick”.

From the time of the Vietnam war, until the late ’80s, one of the biggest drug smuggling operations in the world was run out of Bangkok, specialising in the legendary Thai Stick, shipping hundreds of tons of it all over the world, from Australia to South Africa. In a report published in 2001, The United States’ Drug Enforcement Administration claimed that Thailand was the major grower of cannabis in Southeast Asia in the 70s and 80s.

Legislation up until 9th June 2022

As we can see, Thailand’s history with cannabis is complicated. On one hand, it is engrained in the history of Thai culture and traditional medicine, while on the other hand, its illegal drug smuggling operations gained it an unwanted reputation worldwide. Let’s take a look at how cannabis legislation has evolved in the Kingdom throughout these events.

In the beginning of the 20th century, Thailand began to take part in international efforts to control and regulate narcotics. Known as Siam in that time, Thailand was one of the original signatories of the League of Nations’ International Opium Convention of 1912 controlling the abuse of opium and cocaine. This was later reinforced by the 1925 Convention which was extended to include “Indian hemp”.

In 1922, Thailand introduced its first narcotics law with the promulgation of the Narcotics Act B.E. 2465, which would eventually set the foundation for current drug regulation in the country. In regards to cannabis explicitly, Thailand’s first cannabis law, the Cannabis Act B.E. 2477 came into effect in 1934, prohibiting the cultivation, possession, importation, exportation as well as the sales and distribution of cannabis plants and parts. However, the act does specify that individuals may receive special exemptions for research and medical uses. The Cannabis Act also prohibited the possession, distribution and buying and selling of bongs and other cannabis paraphernalia.

On an international level, Thailand continued to cooperate with global efforts to combat the illicit trafficking of narcotics when it became a member of the United Nations’ Single Convention on Narcotic Drugs of 1961 and the Convention on Psychotropic Substances of 1971.

In 1979, the Narcotics Act of Thailand B.E. 2522 came into effect, repealing the previous narcotic acts, as well as the mentioned Cannabis Act which had allowed for medical cannabis. Both cannabis and hemp were classified as a Category 5 drug, carrying criminal penalties for both consumption and possession.

Despite these restrictions, the illegal use of cannabis continued, and eventually in 2018, the Thai government took steps to soften its stance on cannabis and hemp when the Ministry of Public Health issued a regulation called “Re: Licensing and Approval for the Production, Distribution or Possession of Narcotics Category V Hemp”, which came into effect on January 5, 2018. This regulation allowed the cultivation and possession of hemp for medicinal and industrial purposes under the appropriate licenses and approval from state enterprises.

Later that year, Thailand became the first country in Southeast Asia to legalise cannabis for medical use and research when the parliament voted to amend the Narcotics Act of 1979. The regulation came into effect on February 19, 2019 with the promulgation of the Narcotics Act (No. 7) B.E. 2562 which permitted the granting of licenses under certain conditions. Nevertheless, both cannabis and hemp remained Category 5 narcotics.

Supported by the pro-cannabis Bhumjaithai political party, whose party leader assumed the position of Minister of Public Health, the Food and Drug Administration (FDA) and the Ministry of Public Health (MOPH) continued to take steps towards the decriminalization of cannabis. The next substantial relaxation of laws came in December 2020 when the Ministry of Public Health issued the announcement “Re: Specification of Type 5 Narcotics B.E. 2563 (2020)” under the Narcotics Act, removing certain parts of the plant as well as CBD extracts containing no more than 0.2% of THC, from the Category 5 Narcotics list.

On 9th February 2022, to the delight of the cannabis community, the Ministry of Public Health announced the removal of cannabis and hemp from the Category 5 Narcotics list. Under the new classification, which came into effect on 9th June 2022 only cannabis and hemp “extracts” are listed as Category 5 narcotics, with the exception of extracts containing not more than 0.2% THC by weight and hemp seed oil grown from domestically-cultivated hemp.

Since the decriminalization on 9th June 2022, Thailand has exploded in a “green rush” with cultivators and dispensaries opening up throughout the country. Despite the excitement, there has been much confusion about the recreational status of cannabis in Thailand and how to operate within the boundaries of the law. This is what we will cover in the second part of this Thailand country report which will be published in a few weeks on the Cannavigia news page. In the upcoming article we will dive into the current regulations in place, what they mean for cultivation and production of cannabis in Thailand and we will provide a guide to getting licensed in Thailand.  We aim to bring light in this grey area of the cannabis laws in Thailand.

In the meantime, get in touch if you have questions about the current situation in Thailand.